Earlier this year, I launched the Savvy Shopkeeper Quiz. After taking the quiz, you’ll know what stage of your shopkeeping journey you’re in and get a few free resources hand-picked with shopkeepers like you in mind. It’s beneficial for shopkeepers to understand WHERE they are on their journey, and the quiz gives shopkeepers that clarity!

The quiz also helps ME understand where you are. It helps me empathize with what you’re going through, teach in a way that resonates with your stage, and allows me to steer you toward the resources and podcast episodes that are the most useful for you.

Haven’t taken the quiz yet? Click here to learn what stage of your shopkeeping journey you’re in!

The Five Stages of Every Shopkeeper’s Journey

At this year’s retreat, all of the attendees had a blast meeting shopkeepers from their stage. I broke attendees out into smaller groups based on their shopkeeping stage. I grouped Aspiring and Savvy Starters in one group, and each of the other stages had their own groups.

As I walked around to each group, listening and checking in, it became clear that these shopkeepers craved more time talking with each other and bonding over their shared experiences. It was incredible!

I often tell shopkeepers to create the type of business that works for THEM. You can hear about this in Episode 96: Retail Success is Subjective. It explains why the length of time in business is irrelevant.

Recently, I’ve been speaking more with the Retail CEOs in Master Shopkeepers and identifying what makes them and their stage unique. Their perspective is really insightful, and I’m excited to share more about the type of business owner that reaches the Retail CEO stage.

On the whole, Retail CEOs are risk-takers. They’re visionaries who can think outside the box.

They keep growing because they aren’t bogged down with the daily details of their businesses. This doesn’t mean that they don’t occasionally clean toilets in their stores or take out the garbage themselves, but maybe this isn’t a regular occurrence.

Retail CEOs aren’t better than anyone else—they’ve just become strong delegators and have learned to let go of what doesn’t matter.

Here are ten words I use to describe the Retail CEO.

Yep, Retail CEOs have free time. They’re freer than most shopkeepers in other stages.

They started their businesses to do what they want when they want, and they’ve earned this. They have a sick kid, no problem. If they want to go to lunch with friends or take a long weekend for a girl’s trip, they can! It’s all because they have a team running the business.

Some Retail CEOs may only be in their stores occasionally. The store is a well-oiled machine; they only need to go in when they want or as required.

Retail CEOs tend to have larger teams of 10+ employees.

Their businesses run pretty smoothly. There are the occasional bumps in the road, but overall, everyone knows their roles, and stuff gets done!

Systems support those well-oiled machines! Retail CEOS have their systems and processes in place. Most are documented, and there aren’t many unknowns.

Almost all Retail CEOs have expanded. They’ve taken up more space next door, opened more locations, or even opened sister stores. And they definitely have LOTS of storage, sometimes in the form of a warehouse.

Yes, Retail CEOs definitely pay themselves AND turn a profit. They’ve learned to improve margins and get out of debt. A bookkeeper, CPA, or both supports them, but that doesn’t mean they’re hands-off with their finances—Retail CEOs know how to read their P&L! Shopkeepers in this stage know how to be profitable.

Retail CEOs are natural risk-takers, even if they don’t see themselves this way. They step into discomfort rather than resist it because the return on investment is worth trying. They don’t want to be the “what if” person.

These high-level shopkeepers have TIME to think. They’re always considering how to scale, grow, take on other ventures, and give more value.

To put it simply: Retail CEO is truly a BOSS UP stage.

Finding the Shopkeeper Stage that Feels Right for You

Not everyone wants to be a Retail CEO, and that’s okay! For example, many shopkeepers prefer to work alone and are not interested in hiring. Retail CEO probably doesn’t sound aspirational to them (in fact, it might sound more like a nightmare!).

But if reading these characteristics fills you with excitement and inspiration, then you know this stage is for you.

If you haven’t taken the quiz yet—or if you think things have changed for you in your business over the past few months—go take the quiz!

You’ll learn what stage you’re in and what that means. Plus, you’ll get a curated list of 4-6 podcast episodes for your stage, free resources, and lots of helpful information.

Most of us know that Facebook and Instagram crashed on October 4th. No one could refresh, post, comment, share, run ads, nothing, nada…. for around 6 hours. The panic for some was real! My Mondays tend to be booked with back-to-back client calls. While I did notice there was an issue, but I definitely wasn’t…

Usually, I publish a new podcast episode and show notes each Thursday. But with Thanksgiving, Black Friday, and Small Business Saturday, I didn’t want to interrupt your day with family and friends or take time away from a busy shopping weekend for retailers.  Instead, we’re publishing this on Cyber Monday. I hope this is a…

As we head into the last few weeks of 2021, it’s normal to start thinking about the upcoming year. And there’s a lot of advice out there for bigger businesses! But what can smaller indie retailers expect in 2022? Read on for ten of my predictions. 1. Omnichannel Retail Will Continue to Expand Because retail…

As shopkeepers, it can be challenging to start hiring help—especially when we’re used to doing everything ourselves. Even when we begin to hire, it can still be hard to give up control of all the tasks we’re used to doing on our own.  Growing your store, though, happens when you’re able to do something most…

As I shared in Episode 65 of the Savvy Shopkeeper Retail Podcast, we hear all sorts of myths as independent retailers. From “the customer’s always right” to “you’ll probably show a loss for your first three years in business,” these myths are repeated so frequently that we just believe them to be true!  Today, I’m…

Many of us open or start our businesses without a business plan, a formal education, or any guidance or mentorship regarding running a retail business. And this isn’t a judgment of anyone—this was ME! I started my business without any plan, mentorship, or education, too. When we open, we tend to think about the basics….

This site uses Akismet to reduce spam. Learn how your comment data is processed.

Hey! It is nice to meet you!

My name is Kathy Cruz! I’m a fellow retail business owner and Retail Coach.  My journey into retail started in 2013 when I launched a creative DIY blog with my sister.  We grew from a blog to a brick and mortar home decor store in 2 years.

During this time, I took my deep passion for learning all-things-retail and launched a second blog, Savvy Shopkeeper so I could help other retailers just like me.

The Savvy Shopkeeper blog has also taken a journey.  From a blog to a podcast and an online Academy just for retailers. 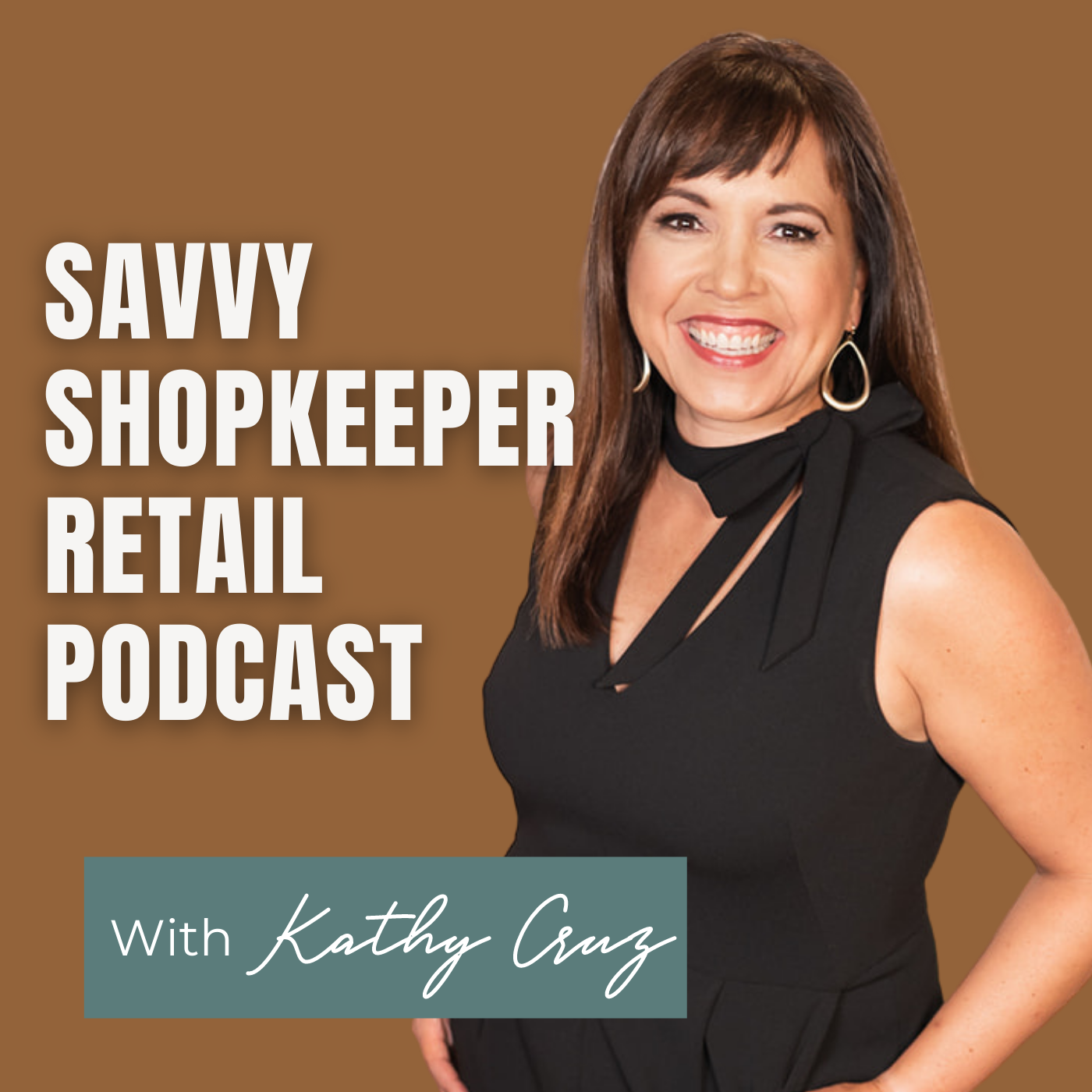